We hear more often that students are beginning to consider career pathways at earlier and earlier ages. But as today’s students dream about their futures, it is essential that they have access to research-based knowledge of those career pathways.

Last year, educators from across the country worked with their students to gather valuable information on what today’s learners believe is most important when it comes to career knowledge. While the results may be surprising to some, they provide valuable insights on career aspirations of our students and how educators can help them achieve those goals.

The below info graphic, developed by the Student Research Foundation, provides just one piece of the information gained from the student perceptions data gathered by ERCA and its partners. In the coming weeks, we will share additional data points, information that can help all teachers better guide their students toward meaningful college and career paths.

END_OF_DOCUMENT_TOKEN_TO_BE_REPLACED

To many the United States is still enjoying the Industrial Age, a time that began as we entered the 19th century. As the country shifted from the agrarian age, we say the introduction of the steam engine, the iron industry, and other such developments that signaled the shift in our economy and our American workforce.

Some see the current age, as we shift from an industrial economy to a digital, information society as a move from that Industrial Age. But as Klaus Schwaub, the founder and executive chairman of the World Economic Forum has written, we are actually entering the Fourth Industrial Revolution, or 4IR. It is a time identified with robotics, artificial intelligence, nanotechnology, and other advances that were considered part of the science fiction of the first through third Industrial Revolutions.

As we enter 4IR, one thing is clear. We need to prepare the students of both today and tomorrow in ways that were different from the past as we ready learners for the possibilities and the jobs of the future. When we moved from an agrarian to an industrial economy, we saw a major shift in education. In the U.S., the industrial age meant a free public education available to all students. It meant more and more individuals pursuing postsecondary education.   And it meant shifting from the skills needed for the farm to the skills needed for a factory.

END_OF_DOCUMENT_TOKEN_TO_BE_REPLACED

While we all know there is no such thing as an “average” teacher, particularly with so many demands placed on educators these days, Education Week recently developed a strong package on what the teaching profession looks like today.

The video and accompanying editorial piece look to U.S. Department of Education survey data to give a clearer picture of what teachers look like today. Among the highlights:

END_OF_DOCUMENT_TOKEN_TO_BE_REPLACED

We may think that a student’s college and career choices are largely decided based on the high school experience. But recent data from the Student Research Foundation tells a more complicated story.

As this infographic depicts, high school experiences rank sixth, from a longer list of items, when it comes to influences of career path decisions for today’s high school students. 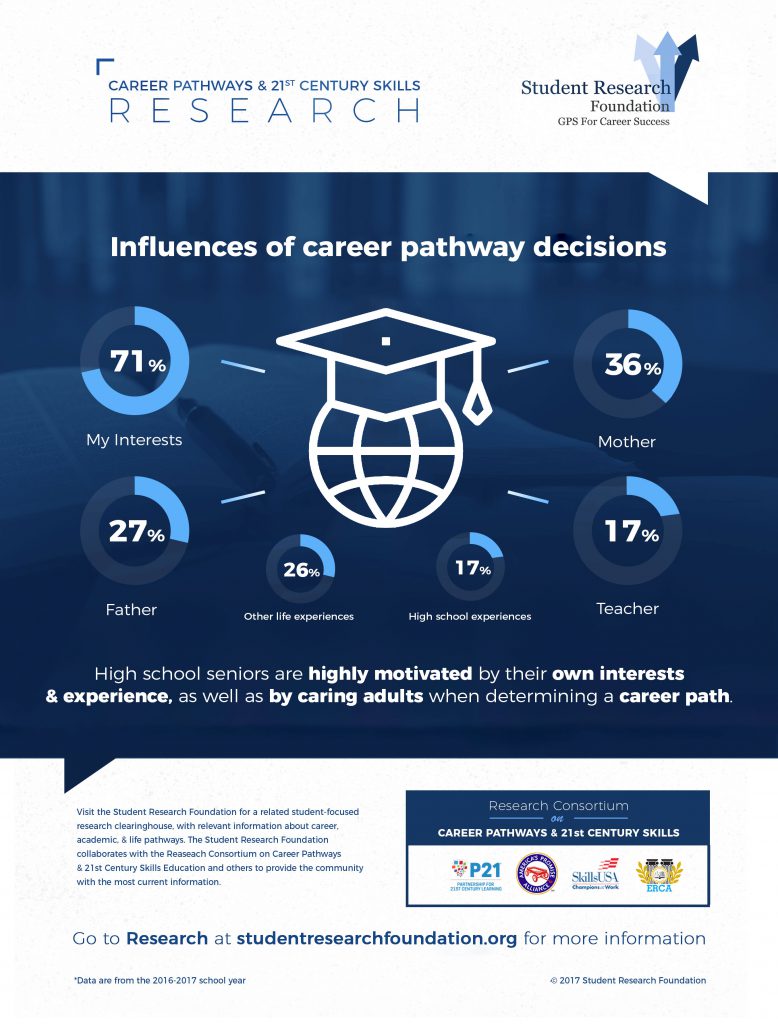 As we help our students and our own kids make important decisions regarding their futures, it is important we consider all of the influences impacting choices.  High school experiences are in the mix, along with other influences.